Known by many different names, Men-gu,Men-yoroiand Katchu-men, the face protection encountered with many suits of Japanese armour is a fascinating topic in its own right, having become highly sought after by collectors for their beautiful craftsmanship and unique forms.

Masks used for protecting the face came in several different styles that were categorised and sub-categorised by which part of the face they covered and also their shape. Generally, those that cover the whole face are known as Somen, those that protect the face below the eyes, Menpo and those that protect the chin and cheek area are loosely termed as Hanbo. They were made mostly from lacquered (or natural russet) steel and iron, although hardened leather (Neri-kawa) is sometimes encountered,

Tengu are goblins that are believed to live in the mist shrouded forests and peaks of Japan, having both Shinto and Buddhist attributes. They are famous for their supernatural powers and also their prowess in martial arts, especially swordsmanship. The patron of martial arts, the bird-like KarasuTengu is a skilled warrior and mischief-maker, especially prone to playing tricks on arrogant Buddhist priests and to punishing those who wilfully misuse knowledge and authority to gain fame or position. In days past, they also inflicted their punishments on vain and arrogant samurai warriors.

This mask, I have made with the same features as the mythical creature having predominantly a crows beak nose. Although Karasu Tengu are not the most common subject seen on face armour, a number of highly regarded examples were made both in masks of Menpo and Somen form during the latter part of the Momoyama and, of course, the Edo periods (1603- 1868).

This example, which I hand forged from good quality steel, has the main components of the mask (the ears, the ‘Yadome’ or arrow stops, etc) made and constructed in the traditional method (i.e. hand riveted together), with the exterior  then filed flush.

The rich russet patina (Sabi-ji) of the piece was accomplished by allowing the entire mask to ‘rust’, out of doors for at least 6 months. After which, the corrosion is stopped with special techniques and finished with a traditional Japanese surface treatment . 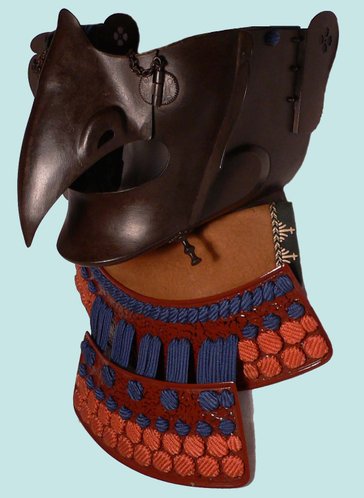