The original armour with deerskin lacing of stencil-dyed "Cherry Blossoms", titled Tatenashi, was one of the heirlooms of the Takeda Family in Kai and is a National Treasure.  It is now owned by Kanda Tennjin Sha Shrine, Enzan, Koshu City, Yamanashi Prefecture.

For this project, my friend and teacher in Japan, Mr Nishioka Fumio, asked me to assist with the making of a full size reproduction of this famous ‘National Treasure’ great armour originally made during Japan’s Heian 平安時代 to Kamakura period 鎌倉時代 (late 12th- mid 13th century). It is exact in every detail, including the historical accuracy of the materials used.

One of the finest modern reproduction of an early Japanese armour you are ever likely to encounter. 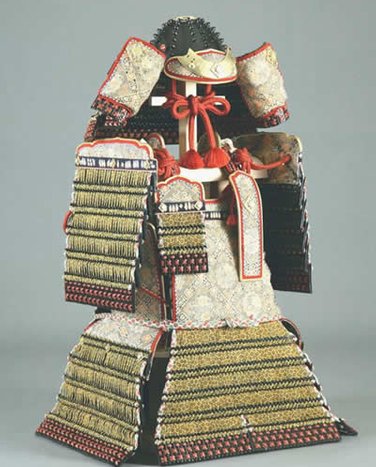 Everything had to be made, as far as was possible, from the same materials that were used to construct the original. The urushi 漆 (natural lacquer) was sourced from native Japanese trees rather than using the lesser quality, cheaper Chinese variety. The gilt, soft metal fittings that adorn and embellish the armour were made from a special Japanese alloy known as 'Kuromi-do' 黒味銅 (copper which contains roughly 1% arsenic). The stencils used in dyeing the soft deerskin for the various facings were hand cut by a specialist Japanese craftsman.

The majority of this 'Great Armour' 大甲胄 was made by Mr Nishioka including the Kabuto 兜 (helmet), E-gawa 絵革 (dyed leathers) and its overall construction. Small rawhide leather (Nerigawa) scales known as 'Kozane' make up the overlapping lamellar construction. Over 3000 kozane were used in the construction of this armour, each being seperately lacquered before being assembled and lacquered over ten times, again and again. Each row is laced to the one above by the 'cherry blossom' stencilled deerskin lacing.

Also used in its construction is iron plate 鉄板, hammered into thin sheets and then made into the 'Kanagumawari', the various parts that have the soft metal 'Fukurin' edging attached. This comprises of the 'Tsubo-ita' (the upper part of the seperate right side section), the 'Sode-kanmuriita' (the top plates of the large square upper arm defence), the 'Muna-ita' (the shaped top plate of the front breast plate), the 'Sendan-kanmuriita' (the hanging laced pendant on the front right side) and the 'Kyubi-ita' the oblong shaped pendant on the front left side. These, and the foundation of the 'Fukurin'ふくりん was my work.

A list of the various crafts people that worked hard on this project are as follows...

Mr HAKODA, Tsutomo (Gilding by Mercury amalgam for all ‘Kanamono’)

This armour was commisioned  by and on display at the Yamanashi Prefectural Museum, Japan.